Impacts of Covid-19 on Women

Impacts of Covid-19 on Women

The global economy shrunk due to the impacts of covid-19, and many countries are putting in place measures to revitalize their economy in several ways. Many people lost their sole source of income due to job cuts. Many organizations were forced to close or scale down their operations. The most affected are the mothers, especially those with young kids of 6 years and below (Bauer, 2021).

The pandemic led to schools’ closure, which made many parents rethink the ways of taking care of their children at home. However, married mothers and those living with their spouses did not suffer a lot compared to single mothers. The state requires to devise ways of helping the mothers to cope with the situation. Provision of quality children care services by the state is one way to help mothers get back on to their feet amid the pandemic.

In low-income countries, 70% of women earn their money through informal labour, such as domestic work and agriculture work that relies heavily on interaction with others. These jobs are less likely to provide paid sick leave or protect workers against job loss or unemployment. The majority of women and men surveyed said their ability to earn an income has declined due to COVID-related shutdowns and social distancing. However, this situation was far worse for women.

Nearly 47% of women surveyed reported that the financial situation in their home had become a lot worse in the first six months of COVID, compared to just over 40% of men. Another study interviewed 10,000 women across 38 countries and found that 55% of these women lost jobs or income due to the pandemic, compared to just 34% of men. Even women in the formal job sector have faced inequality due to COVID-19: Women in Bangladesh have been six times more likely than men to lose paid working hours.

Women are more likely to go hungry due to the pandemic

The links between the pandemic and increased hunger levels are undeniable. The impact of COVID-19 on women is especially hard in this area, as well. Nearly 48% of women surveyed said that their families were eating less; compared to just under 36% of men who said the same.

A lot of this comes down to deep-seated gender inequalities. In most communities, women are more likely to be responsible for buying and preparing food for their families. As caregivers, they’re also less likely to eat as much as men. Often, women eat last and less than their family members.

“Now I have to feed my children without eating,” one respondent in Bangladesh told us. Another woman, also in Bangladesh, added that she doesn’t share her family’s food struggles with her husband, father-in-law, or children: “My husband sometimes eats a little less when he understands there is less food. I eat after feeding everyone in the family.” 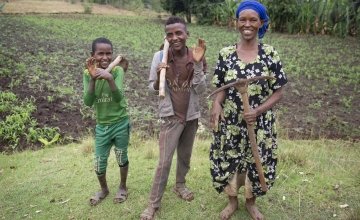 Mestawat Sorsa, pictured with her sons Abinet and Zekiyos near their home in Ethiopia. Following the death of her husband 7 years ago she says the family struggled to survive.

According to the UNFPA, nearly 3/4 of the global health and social sector is female, including frontline healthcare within communities. This obviously increases the risk of more women contracting COVID-19, especially since much of the PPE equipment delivered to communities is sized for men.

But the risk for infection is just the tip of the iceberg. As we’ve seen at home and abroad, the emotional needs of healthcare workers (especially those on the frontlines) are more important than ever in a pandemic. Women especially need to be given a seat at the table when it comes to response planning and decision-making. Even with 75% of those working in the health and social sector being female, those who are working on the frontlines and noticing trends or warning signs may go ignored in their community if gender inequality is the norm.

The increase in unpaid labour at home has negatively impacted women’s economic security, as well as their mental and physical health and wellbeing. 43% of women surveyed reported feeling more anxious, depressed, overworked, isolated, or physically ill because of this increased workload. In Nairobi’s informal settlements, 26% of women surveyed said that they had been physically unwell, unable to get enough rest, or were feeling stressed and anxious because of increased care responsibilities.

Men may face a higher mortality rate for COVID-19. However, this doesn’t mean that women who survive the coronavirus have an easier future ahead of them. In fact, a higher male mortality rate means a potential increase in female-headed households, which in some countries means severe socio-economic implications. Female-headed households can be more vulnerable to harassment and violence, especially for displaced families. Losing a patriarch can, in especially vulnerable communities, also cut a family off from regular income and increase the likelihood and severity of poverty.

COVID-19 has led to increases in gender-based violence

The financial, social and health stressors of a pandemic, combined with close confinement during lockdowns, mean that women and girls are at a higher risk of violence from their family members, domestic partners, or within a community. We saw this happen during the 2014–2016 Ebola epidemic in West Africa, with increased incidences of gender-based violence, and fewer resources for women and girls who were experiencing abuse (given the increased demand for healthcare workers in helping to halt the spread of the virus).

In July 2020, violence against women and girls was described as a “shadow pandemic” by the UN Secretary General as reports of GBV skyrocketed globally. The Center for Global Development found that of the 30 studies reviewed, 43% showed increases in violence against women and children, and 27% showed mixed findings (which indicates increases in at least one measure of violence and is largely attributed to underreporting).

A pandemic can end a girl’s education

In many countries, being a girl is already a barrier to education. When the barrier is amplified by a health crisis and a potential lockdown, this makes maintaining an education difficult for all children, but especially so for girls. Estimates for 2020 suggest that child marriages increased by 500,000, due largely to lockdowns and young girls being married off as a financial remedy. In Sierra Leone, teenage pregnancy was more frequently raised by female respondents than their male counterparts (who, even when probed, did not identify this as a major issue).

School closures in general have a larger impact on girls, who may be less likely than boys to return once they reopen. In many countries, Ministries of Education have identified girls as a particular risk group for not returning to school in order to offset potential drop-out rates.

Estimates from 2021 indicated that as many as 9.5 million girls and women failed to receive essential reproductive health services in 2020. Overburdened healthcare systems diverted resources to COVID-19 response, services were reduced for non-essential treatment, and many women and girls simply feared going to a doctor’s office, clinic, or hospital. According to our survey, nearly 37% of women felt that they, or others in their family, were unable to visit health facilities when needed (compared to just over 32% of men). Most concerning was that over 68% of women said that COVID-19 was a reason for them not to seek healthcare in future. This suggests that the negative impacts of the pandemic may affect future behaviour as well as current trends.

A young girl at a temporary displacement camp in DRC.

☑ Zero Plagiarism
The client’s need is always our priority. We check all papers to ensure authenticity and make sure it is 100% plagiarism-free.

☑ Money-back guarantee
Our customers are always free to initiate the refund process in case they are not satisfied with the quality of the paper.

☑ Timely delivery
We have a team of writers who have a strong belief in punctuality. They deliver the paper way before the stipulated deadline because they are quick and precise in their work.

☑ Privacy guarantee
We encourage confidentiality because we recognize that every client has the right to privacy. We keep our clients’ details confidential and focusing on confiding the information in our company.